In his compelling new thriller CLOSER THAN YOU KNOW, Brad Parks confronts head on every parent’s nightmare. The novel’s protagonist, Melanie Barrick, overcame a difficult childhood to find the idyllic family life she’s always wanted. Then she goes to pick up her infant son, Alex, from daycare, only to find that Social Services has removed him… and nobody will explain why. When she arrives home, she learns that her house has been raided by sheriff’s deputies, who tell her that they’ve found enough cocaine to put her behind bars for years. Though she maintains her innocence, the evidence quickly stacks up against Melanie, and she knows she will lose Alex and her freedom forever if she can’t find definitive proof that someone is trying to frame her.

CLOSER THAN YOU KNOW is a chilling story of governmental indifference, injustice, and the power of love. Parks, the only author to have won the prestigious Shamus, Nero, and Lefty Awards, has kindly agreed to share his thoughts on CLOSER THAN YOU KNOW, his writing process, and his future projects.

CLOSER THAN YOU KNOW explores the effectiveness of the child-services and criminal-justice systems. What drew you to write about these issues? Are any of the incidents in the book based on fact?

As an upper-middle-class white kid from Connecticut, I grew up with exactly zero experience of the child welfare system. Then I spent a decade as a reporter in Newark, New Jersey, where child protective services was an enormous presence in people’s lives. It was fascinating to me that in America—a nation founded by guys trying to resist tyranny—we created a system that gives government so much authority over such an intensely personal aspect of citizens’ lives. Think about it: No matter where you live, there is a state or local agency that has legal ability to take your children away from you. Now, most of the time, that authority is only used with great caution and only as a last resort. But what an awesome power. Especially if it was abused. That’s the basic germ that I allowed to take root in CLOSER THAN YOU KNOW: That someone who understands the system could manipulate it to steal someone’s baby.

I don’t know if you’ll agree, but I found there to be two protagonists in the story—Melanie but also the attorney prosecuting her, Amy Kaye. Are there any particular challenges in structuring a story that has two protagonists who are nevertheless pitted against each other?

Thrillers readers—all readers, really—have become a lot more sophisticated in this regard. Thirty years ago, you almost never had multiple points of view in a novel. Now it’s so de rigeur it’s almost expected. The philosophers among us might point out this is a natural result of the movement toward postmodernist thought, with its emphasis on pluralism. I’m not a philosopher, just a guy who is trying to get you to turn pages faster. And to me having a secondary protagonist gives the story juice, especially when they’re pitted against each other. That’s extra conflict, extra complexity; and those are the kinds of things that supercharge a high-concept thriller.

Please tell us more about Melanie. How does her upbringing motivate her? How does it help her deal with the horrible obstacles facing her?

So, true story, my kids had this babysitter named Nikkita. She was a bright, friendly young woman, a college student with a good head on her shoulders, the kind of person you’d want babysitting your kids. I came home one day and my kids were excited to tell me they had learned that “Miss Nikkita” had more than twenty brothers and sisters. It turned out she had grown up in foster care. I was working on another book at that time, but I already knew my next book was going to involve the social services system somehow. And it was one of those moments where I realized, Oh my goodness, I’ve just met my protagonist. Because, really, who better to understand the horrors and pitfalls of the system—and, perhaps, to have the toughness to survive it again—than someone who grew up in it?

Please tell us more about Amy Kaye. Do you have plans for her to appear in a future novel?

I have absolutely no legal training. But I’ve spent a decent amount of time hanging out in courtrooms, first as a newspaper reporter, now as a nosy novelist with too much time on his hands. Amy Kaye is very much inspired by what I’ve seen there. She’s a lawyer’s lawyer—highly ethical, aware of the role she is supposed to play as a prosecutor, dedicated to doing what’s right. The fun thing is to then take someone with that strong a moral compass and try to knock her off truth north. And, yes, I can see a character like that coming back someday.

CLOSER THAN YOU KNOW masterfully portrays characters who are flawed yet infused with humanity. One example is Melanie’s neighbor, Bobby Ray, who displays a confederate flag, has an arsenal in his trailer, and yet is loyal to his neighbors. How do you manage to create such layered, complex characters?

Easy. I steal from real life. The inspiration for Bobby Ray came to me, quite literally, while jogging one day. I had turned my ankle on a rough stretch of sidewalk and was writhing on the ground when this guy pulled over and asked if I needed help. And, yeah, I did. This was October 2016, the heat of the Presidential election, and I’m not in this guy’s car for twelve seconds before he uncorks this rant that begins, “Well, I can’t believe we’re going to put That Woman in the White House.” He then goes on to spew all this bile about Mexicans stealing jobs, lazy blacks who don’t want to work, etc. etc. He is straight from the Basket of Deplorables. And yet he was also willing to help out a total stranger in a time of need. So that’s Bobby Ray. He’s the racist with the heart of gold.

Putting aside Melanie and Amy, who’s your favorite character in CLOSER THAN YOU KNOW, and why?

No question: Bill Honeywell, Melanie’s lawyer. He’s the kind of character I love, because I had absolutely no expectations of him when he first shuffled on stage. He was just this cliched ham-and-egg local defense attorney who had bags under his eyes and wore the same wrinkled suit all the time. But his role, and his importance in Melanie’s life, kept growing. As it did, I found myself wanting to know more about the guy. He turned out to have this compelling backstory—and a lot of interesting things to say about life and the law. But one of the things I liked best about him was that it was never forced. His character development felt very organic. It was like the story itself was demanding he become a bigger player.

You’ve written both series and standalone novels. What do you find gratifying about each approach? Are there downsides to either, and if so, what?

I’ve enjoyed aspects of both. The beauty of a series is, of course, that you don’t have to spend a lot of time building the world. For the most part, you know the characters, the setting, and the voice, and you can just dive into the story. There’s comfort. There’s familiarity. Readers love that. Though, if there’s a downside to that, it’s that maybe it can be a little too comfortable. A series is more or less a contract with the reader that the protagonist is going to make it out alive and survive for the next book. There are no such assurances in a standalone. I like that lack of safety. In short, it means I can kill whomever I like.

Who are some of your favorite writers? Can you include one or two NON-thriller/mystery writers among them?

Harlan Coben. Lisa Gardner. Joe Finder. Megan Abbott. Don Winslow. William Landay (if he ever comes out with another book. . . c’mon, Bill). Alafair Burke. Linwood Barclay. Liza Lutz. Jamie Mason. Marcus Sakey. Chris Holm. Hilary Davidson. Steve Hamilton. I can keep going—and I hate that I’m leaving people out—but you get the idea. And, no, I’m not going to include non-thriller writers; because, one, I think our genre is so loaded with talent, I don’t need to; and, two, my definition of a thriller is fairly expansive. To me, To Kill a Mockingbird, which is one of my favorite books of all time, is a legal thriller. Mark Twain wrote thrillers. Heck, if you want to go way back, One Thousand and One Arabian Nights is a thriller series—with Scheherazade facing a ticking clock for the ages. It’s a big tent, and I don’t feel the need to leave it to stay entertained. 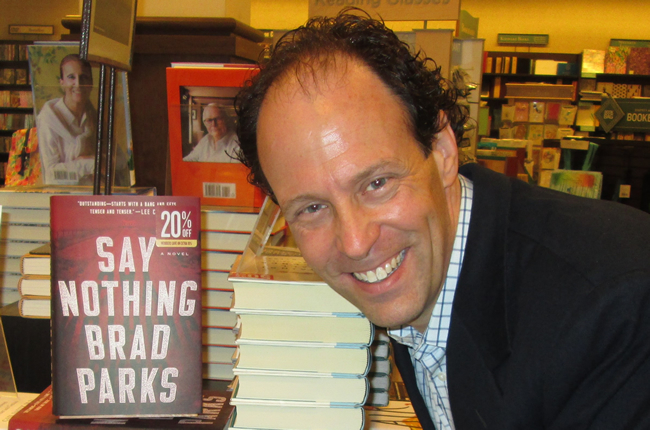 Please describe your writing process: Outlining or not, locations where you write, hours per day?

I write at my local Hardee’s restaurant. It’s a fast food chain, primarily in the American Southeast, that eschews all modern trends in healthy eating. (Hardee’s motto is “Eat like you mean it.”) I’m basically there because it has free refills on Coke Zero and no wireless internet access—the internet being the worst distraction ever created for a writer. I get there between 6 and 7 each morning, and stay there until the words stop making sense, which is usually about four hours. Oh, and I’m a total seat-of-the-pants writer, not an outliner. I’ve found I bring more energy to the writing if I don’t know what’s going to happen next.

I was an International Thriller Writers debut author in 2013 and had the privilege and pleasure of seeing you, Daniel Palmer, and the late, great Michael Palmer sing at the ThrillerFest banquet. In fact, you’ve serenaded banquet attendees many times. Please tell us what the ITW has meant to you as an author?

When I think about a lot of the great things that have happened to my writing career—both in terms of the contracts I’ve signed and the relationships I’ve formed—a lot of it can be traced back to ThrillerFest in one way or another. More than that, it’s just a blast to go and hang out with this amazing group of book people. Every July, I tell my wife that I’m going to New York City for a “work conference.” I think by now she’s onto me. I go because it’s a great time.

Please tell us about your next project.

It’s about an out-of-work actor who is hired by the FBI to go to a federal prison, pretend to be a convict, and befriend a former banker who has documents that could lead to the downfall of a ruthless Mexican drug cartel. I’ve got a draft done already, and it still needs work. But if there’s one thing I love about it, it’s that what I originally thought would be The Big Twist didn’t even end up in the top three. It’s tentatively titled The Last Act, and it’ll come out from Dutton a year from now. After I’ve fixed it.

Robert Rotstein
Robert Rotstein is the USA Today best-selling author of We, The Jury (Blackstone 2018), a Suspense Magazine 2018 Best Book. With James Patterson, he is the author of The Family Lawyer, the title story of the New York Times best-selling collection. He has written The Bomb Maker’s Son, Reckless Disregard, and Corrupt Practices (Seventh Street Books), about attorney Parker Stern.

Winner Takes All by Robert Bidinotto