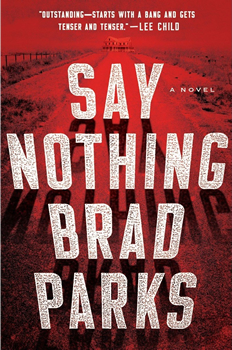 Brad Parks took the advice of a friend and wrote the book that scared him. SAY NOTHING follows a Virginia federal Judge and his wife when they face every parent’s worst nightmare: the kidnapping of their young children. For Scott and Alison Sampson, the kidnapper’s call is only the beginning of a twisting ordeal of blackmail, deceit, and terror.

“My kids are elementary-school-aged,” Parks said. “I can think of nothing more terrifying than someone kidnapping them. A judge ruling on an important case struck me as just the right motivation for a kidnapper.”

Avid readers and Parks’ fans will notice the absence of Carter Ross, the protagonist of his six previous books. The author believes certain stories can’t be told through a journalist point of view. However, hope is not lost.

“I’m not declaring Carter Ross dead. I was just ready to try something new. There are certain stories you simply can’t tell with a journalist for a protagonist, and this was one of them.”

Another difference in SAY NOTHING is the increased levels of suspense. The fact is, there’s little place for humor when dealing with the kidnapping of children and it presented quite a challenge for the author.

“It’s a major shift for me,” Parks says. “It’s more ambitious than any of my previous work, in addition to being a departure in tone and style. I can also fairly say I worked harder on it than anything I’ve done before. I dug deeper into the characters and pushed myself emotionally more than I ever have. I actually had one editing pass where all I did was go through the manuscript and remove any lines that struck me as remotely funny. I think and hope this book will always have a very special place in my heart. In a lot of ways it’s my first fully mature work.”

As readers we follow a very realistic account of how parents could react under dreadful circumstances, and no detail is to too small to make that point, from poignant moments with the kids’ toys to family intervention. Brad Parks doesn’t hold back, and much suffering will come before the hammer hits the gavel for Judge Sampson.

“There are a few things the Judge Sampson and I share. We both live in a rural part of Virginia. We both have two kids. We both deeply love our wives. We both enjoy our jobs. The difference is, I still get to enjoy that idyllic life, whereas poor Judge Sampson had his destroyed by a certain pitiless author.”

Federal judges are notoriously publicity shy, making it difficult to penetrate that judicial wall at first. Eventually he was able to find a judge who was gracious enough to let him into the world and talk about what the job was really like. “I can’t reveal too much,” he says. “I promised the judge anonymity—but I couldn’t have written the character of Scott Sampson without those insights.”

As usually happens, each author has a different place in the world that brings the muses together. SAY NOTHING has the dubious honor of being written almost entirely at the home of Thick burgers and Biscuits N’ Gravy.

***caption***“I first started writing at Hardee’s because it was far enough away from my house that I couldn’t hear my children screaming. It had free refills on Coke Zero, and it lacked wireless internet access–a real key for me: I just can’t keep myself away from shark videos.” His schedule starts early at 7 am and except from some citizens taking advantage of the seniors’ discounted coffee, he has the place for himself. “I always say we have a lot in common: I’m writing about dead people, they’re talking about people who are dead.”

When it comes to newsletters, Brad Parks shares the floor with a group of characters modeled after iconic traits. He calls them interns. Meet Maggie the clueless, Peter the slothful, Sarah the smart, and Zach the silly.  Parks said he got the idea of making interns the star of his newsletter from having been a reporter at a newspaper, where an increasing amount of the copy was written by interns.

“The interns I worked with were an endless source of amusement for me,” Park said. “So as I was making the transition to becoming an author, I thought I should bring some interns with me. Zach, Sarah, Maggie, Peter, and I have had some fun together through the years. I just wish I had more control over them. They really run roughshod over me sometimes.”

Parks says he is one of those writers who look back on their previous writings and cringe. “And that’s good,” he says, “because it means I’m still growing as a storyteller.”

His father was a huge fan of John D. MacDonald, so Parks started reading Travis McGee since he was 12. From a contemporary standpoint he admits to emulate the easy flow and readability of Harlan Coben, the verisimilitude of Michael Connelly, and the everything of Lisa Gardner.

Brad Parks is the only author to have won the Shamus, Nero, and Lefty Awards, three of crime fiction’s most prestigious prizes. A former reporter with The Washington Post and The Star-Ledger (Newark), he lives in Virginia with his wife and two children.

To learn more about Brad, please visit his website.

Follow me
José H. Bográn
José H. Bográn is an international author of novels, short stories, and scripts for television and film. His genre of choice is thrillers, but he likes to throw in a twist of romance into the mix. He is a freelance writer, a translator, and a university professor of academic writing, public speaking, and English as a second language (ESL). He currently lives with his family in Honduras. Find him on Twitter, Facebook , and Instagram.

Anatomy of Innocence: Testimonies of the Wrongfully Convicted