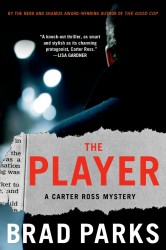 Brad Parks is a funny guy. Five books ago, he attended the debut author breakfast at ThrillerFest and used his one minute to give a now-infamous serenade to Brad Meltzer, and last year he performed a hilarious song at the awards banquet with Michael and Daniel Palmer.

However, Brad’s comedic talent shines best in his crime novels, featuring Carter Ross the charismatic, khaki-wearing, street-wise news reporter with a conscience, who stumbles upon murders and investigates crimes with the grit and doggedness of a New Jersey sleuth. THE PLAYER is his fifth book in the series, which mixes actual headlines with colorful characters, plenty of action, and surprising twists.

It’s no coincidence Brad’s main character has a nose for news. Before embarking on a successful career in fiction, Brad spent a dozen years as a journalist working for THE WASHINGTON POST and THE NEWARK STAR-LEDGER, where he covered everything from the Super Bowl to Hurricane Katrina to a quadruple homicide.

In Brad’s latest novel, THE PLAYER, residents of a Newark neighborhood are getting sick—and even dying—from a strange disease. Carter Ross dives into the story—so deep he comes down with the illness himself. With even more motivation to track down the source of the disease, Carter soon hits upon a nearby construction site. But when the project’s developer is found dead, and his mob ties surface, Carter knows he’s looking at a story much bigger—and with even more dangerous consequences—than an environmental hazard.

Brad took some time to chat about his characters, news reporting, and New Jersey, the jackpot state for crime novelists.

Carter Ross is the smart, resourceful, dogged reporter we all want to believe exists. Is he more fact or fiction, or part of a dying breed?

There are times when I worry booksellers will look at a novel about a newspaper reporter who is given time to do in-depth investigations and file it under historical fiction. There’s no doubt Carter’s species is endangered; and, yes, I believe that has dire consequences for our democracy. But rather than risk getting preachy about that topic, I’ll just summon some old Monty Python and say Carter and his ilk are not dead yet. Thank goodness.

As both a crime writer and humorist, how much do you love New Jersey?

I love it, like, a billion million quadrillion. How could I not? New Jersey really loads a writer’s toolbox with possibilities. The state has every ethnicity—and therefore every ethnic criminal syndicate—along with every religion, socioeconomic class, creed, and color. It’s a crossroads for nearly every illegal activity you can imagine, whether it’s drugs, guns, human trafficking, stolen cars, you name it. And because it’s the most densely populated state, all those people and all that illegality can’t help but bump into each other. Those intersections are where you find great stories. I mean, a few years back we had a political kickback sting operation that netted a rabbi who was selling kidneys on the black market. How cool is that? And let’s not even talk about the political culture. There are a lot of people in New Jersey who can’t figure out why Chris Christie’s Bridgegate has become such a big deal. To them, using power vindictively is not a scandal. It’s just how the game has always been played.

In THE PLAYER, you point out some fascinating details about the law, mob activity, Newark’s history, toxic chemicals, fatal diseases, to name a few. Does all this knowledge come from your background as a reporter or are you doing as much research as writing?

I research as an absolute last resort. I’ll Google what needs to be Googled—we all do that, right? But otherwise I think I picked up the phone maybe twice during this book. I’m fortunate to have had the kind of job where I lived my research.

Some of your most memorable characters are Carter’s interns, like Sweet Thang, Lunky, and now Pigeon, who gets her nickname after an unfortunate incident with a one-legged bird. Do you have a favorite intern?

I have so much fun with those interns, I’m not sure I could pick a favorite. And I’m glad readers enjoy them, too. A few years back, I did a program with the Cuyahoga County Library system where they rotated a group of authors around to different rooms to talk about our books. When I got to the last room, there was a guy in the back who held up a poster that said, “BRING BACK SWEET THANG.” I am pleased to say I am contemplating her return in a future Carter Ross novel.

In THE PLAYER, Carter Ross mentions the steady decline of newspaper jobs over the last decade. With so many authors starting out as journalists, including myself, how do you see the paths of future novelists changing?

Let’s simplify writing for a second. It’s the process of articulating thoughts on paper (be it actual or virtual). So, sure, journalism is great training for being a novelist. But I’m not under the illusion it’s the only job that fits that description. Any profession that forces people—especially when they’re young, for whatever reason—to turn that trick of articulating thoughts on paper is going to have the potential to produce great novelists. Historically, that’s meant our profession is rotten with advertising people, lawyers, screenwriters and, yes, journalists. But ten years from now I’m sure we’ll start seeing a profusion of authors who wrote those early words for a Web site. And in fifty years, it will be some medium we can’t even imagine. But the fundamental skill being developed won’t change.

Your writing has been compared to Michael Connelly and Janet Evanovich, and I’m going to throw in Dave Barry as well. I think humor is the hardest thing to write and I wonder if you have to work at it or does all that wit flow naturally?

To me, it arises out of character and situation, and you can’t force either of those things. Carter Ross is a funny, self-deprecating guy. Having him say and/or think funny things is natural to who he is and his worldview. And sometimes, he gets himself into a predicament that winds up being humorous. But I don’t start a book saying, “Okay, how am I going to make this funny?” You also have to be careful in this genre not to sacrifice suspense for laughs. They call these things thrillers for a reason and I try to never forget that.

You seem just as devoted to family and lifestyle as you are to writing, which reminds me of a Francoise Sagan quote, “I shall live badly if I do not write, and I shall write badly if I do not live.” Has that been your philosophy?

Jeez, A.J., you’re making my philosophy out to be a lot more elegant than it really is. The fact is, I’m a washed up newspaper guy who has no other marketable skills. My children are small, and with the rate at which college tuition is escalating, it’s going to be ninety grand a year by the time they get there. So maybe my version of that Sagan quote is: “If I shall write badly, my children shall need to win athletic scholarships. And if my children shall need to win athletic scholarships, they shall end up working the deep fryer at McDonalds because neither one is that coordinated.”

That in order to do good writing, you first have to do a lot of bad writing. That’s actually not advice I’ve heard, that’s advice I give. And, trust me, when it comes to bad writing, I have a lot of experience.

Brad, thank you so much for giving us your thoughtful insight, and a good laugh for the day.

Thanks for the interview! 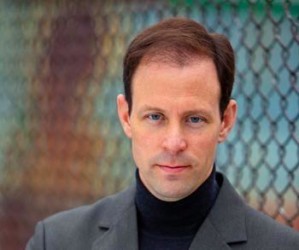 Brad Parks is the only author in history to have won the Shamus, Nero and Lefty Awards. A Dartmouth College graduate, he spent a dozen years as a journalist, working for The Washington Post and The Newark Star-Ledger. He is now a full-time author who lives in Virginia with his wife and two children.

To learn more about Brad, please visit his website.

AJ Colucci
A.J. Colucci is an author of science thrillers, stories that combine true, cutting-edge science with the adrenaline-rush of a thriller. Her latest novel, SEEDERS, was described by #1 New York Times bestselling author Douglas Preston as “Gripping and brilliantly original.” Her debut novel THE COLONY was given a starred review by Publishers Weekly and Booklist called it “a frightening combination of well-researched science and scenes of pure horror.”

The Riviera Contract by Arthur Kerns

The March 2014 Edition of The Big Thrill